May 9th | 4:30pm – 5:45pm
Join with members of the Devanadi Sangha/Community to come together, practice, and raise money for the victims of the recent Nepal earthquakes.

Come for a special practice sharing our love of asana and yoga with a focus on metta (loving kindness) and karuna (compassion).

All levels and all students welcome! Bring a yoga mat if you have one and a blanket to sit on.

Some 5,489 people were confirmed dead as of Thursday morning as a result of the massive earthquake, with another 11,440 injured, Nepal’s National Emergency Coordination Center told CNN. Officials have warned the death toll is expected to rise.

Nineteen of the deaths occurred on Mount Everest, where the tremors set off deadly avalanches, the Nepal Mountaineering Association said.

Two neighboring countries, India and China, have reported totals of 72 and 25 deaths from the quake, respectively.

The frequent downpours in Nepal have made it harder for emergency workers to help the injured.

CNN’s Dr. Sanjay Gupta was at an army field hospital in Kathmandu when the heavens opened Tuesday.

“The rain has arrived, and in many cases, this is the worst-case scenario,” he said. “This is what they were hoping wouldn’t happen.”

Gupta said it was “kind of remarkable what they’ve been able to do” at the makeshift hospital. Over three days, the medical staff there had treated 617 patients and saved 586 of them.

Kathmandu, Nepal (CNN)Half a million tents are urgently needed for the huge number of people forced from their homes by Nepal’s devastating earthquake, a government minister said Wednesday.

Minendra Rijal, Nepal’s minister of information and communications, said relief operations were underway but that much more needs to be done.

“Life is returning to normal, but it will be some time to be completely normal,” he said. “We have still not been able to properly manage to provide relief.”

Rijal wasn’t able to put a precise number on those made homeless by Saturday’s devastating quake, but he said the government had so far provided more than 4,700 tents and 22,000 tarpaulins to those in need of shelter.

Aircraft loaded with tents are expected from India and Thailand in the next day, he said, with another 100,000 tents expected from Pakistan.

UNICEF Regional Communication Advisor Jean-Jacques Simon said the supplies “are desperately needed by those living in camps, and other areas in Kathmandu, the Kathmandu Valley and in hard-to-reach remote areas, where UNICEF plans to distribute the items as soon as possible.” 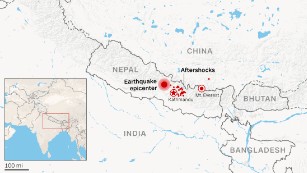 The United Nations has said the quake has affected 8 million people across 39 districts.

Rijal said 21 helicopters, including seven provided by India, were helping in the rescue and relief efforts, with 866 people rescued by air and a little more than 1,000 rescued using land transport.

Heavy rain has intensified the hardships for the countless Nepalis who are sleeping out in the open because their homes were destroyed or they don’t feel safe inside buildings amid continuing aftershocks.

At Tundhikal Park, known now as Tent City, the crowds are thinning, but it’s not necessarily a sign of improvement.

On Wednesday, some had enough of sleeping huddled in a tent and were readying to return to their houses. That’s the correct term — houses; they were no longer homes, no longer places of sanctuary.

Obama and he talked about disaster response efforts and Obama pledged that the United States “will do all that it can to help the people of Nepal in their time of need,” the White House said.